MAY WE SUGGEST A BEER PAIRING FOR THAT?

Beer sommeliers could be coming to high-end restos 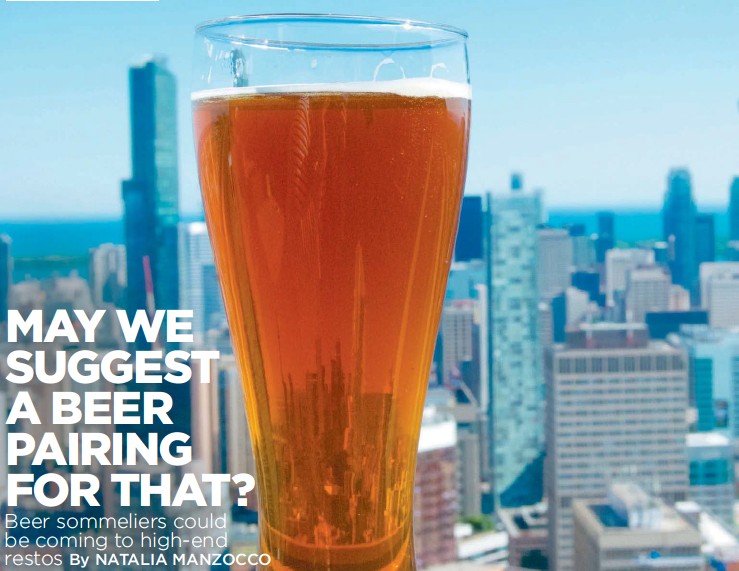 The tidal wave of craft suds sweeping the city’s dining scene appears to be washing up on some very exclusive shores. Atop the Manulife Centre, the newly revamped One Eighty lounge hopes to trade tourists’ dollars for pints of Goose Island Ale or bottles of Mill Street 100th Meridian. The Can-Con on Canoe’s menu now extends to Muskoka Cream Ale and Left Field, while Bymark offers local faves like Steam Whistle and Beau’s Lug-Tread. Even the Trumped-up America has made a point of offering Mad Tom IPA by the bottle (naturally, at a hideous markup). That’s good news for those who are willing to wash down a day and a half’s pay with a toasty craft lager or a bracing IPA. But since drink lists are still dominated by wine lists as long as your forearm, chi-chi cocktails and treasure troves of single malt, the city’s top kitchens have yet to fully explore the love affair between beer and food, say local beer scholars. “There is a movement toward having craft taps – but there isn’t really an understanding of how well beers pair with food,” says Doug Appeldoorn, who conducts tastings and teaches Prud’Homme beer sommelier certification courses under the Schoolouse Craft Beer banner. “There’s lot of thought going into what wines pair with food, but not the same with beer.” Adds Matt Sieradzki, a beer sommelier and the bar manager at the newly opened Craft Brasserie in Liberty Village, “I don’t expect beer to be the main focus, but generally, when I look at what beers [upscale restaurants] have – if there are any – [the list] looks either thrown together or very heavily influenced by a select brewer.” Nowadays, a range of craft brews is standard in any culinary hot spot worth its salt and not just at brasseries like Beerbistro or Bar Hop, which have essentially redefined beer-friendly cuisine. Meanwhile, training programs are turning out an increasing number of qualified beer sommeliers, while educators like Appeldoorn are busy giving pairing workshops that teach drinkers to enjoy beer in tandem with chocolates and cheeses. So why haven’t high-end eateries put their considerable resources toward bringing in their own sommeliers or exploring daring pairings? Tonia Wilson, a chef and beer/wine sommelier who’s working on a beer-pairing cookbook, acknowledges that the burning thirst for craft beer among younger diners may not yet have spread to the expense-account crowd. “I think those restaurants – the really highend ones – are going to pull in wine people more than beer people,” she says. “That’s not to say those people won’t splurge on an excellent beer, but they’d probably go to Bar Volo or somewhere where [they do put] beer first.” But there are some distinct benefits for those restaurants that might be willing to experiment with beer, she says. “Sometimes, I hate to say it, but beer can be more forgiving – with the wrong wine match, it can bring out pretty bad effects [in food].” Higher-end restaurants might still be far more eager to fill a menu with $25 glasses of wine over $8 bottles of beer, but the lower wholesale cost associated with beer allows bars to take more interesting risks. “You can offer really cool items and not commit too much financially,” Wilson says, “With wine, you could be dropping $400 for a case that might sit in the cellar. With beer, you can drop maybe $40 and see if it moves.” And as craft brewing becomes ever more complex and fascinating both at home and abroad, the options are growing more enticing. Appeldoorn points out that restaurants could make room in the cellar for rare picks like Samuel Adams’s Utopias – at $115 per bottle, the brandy-like 27 per cent ABV brew is available only every two years – or Westvleteren 12, brewed in small batches by Trappist monks in Belgium. “People are willing to spend on that,” Appeldoorn says. “If you have a cellar like that in a restaurant, you can kind of up the game.” With any luck, the days of high-end restaurants having beer pairing menus or a dedicated beer sommelier could soon be upon us. Appeldoorn often trains chefs, restaurant servers and bar staff in his courses. Sieradzki, meanwhile, has seen an increased demand for his services in recent years, whether for building a beer portfolio, holding tastings or training restaurant staff. “It seems like there are more and more places with a ‘beer guy or girl’ – which is great because I’m seeing more and more places where I want to drink beer.” Wilson has seen the same thing happen before. “Wine has made huge strides over the last 30 years. Before that, people never thought of wine as a beverage to pair with food – it was more of a social drink. People have learned a whole lot more, and have a huge interest in learning about food and wine pairings. It will get there with beer, too.”