CAN T.O. EVER BE BEER CITY?

Councillor Mike Layton wants that designation for Toronto, but some find it a hard concept to swallow. 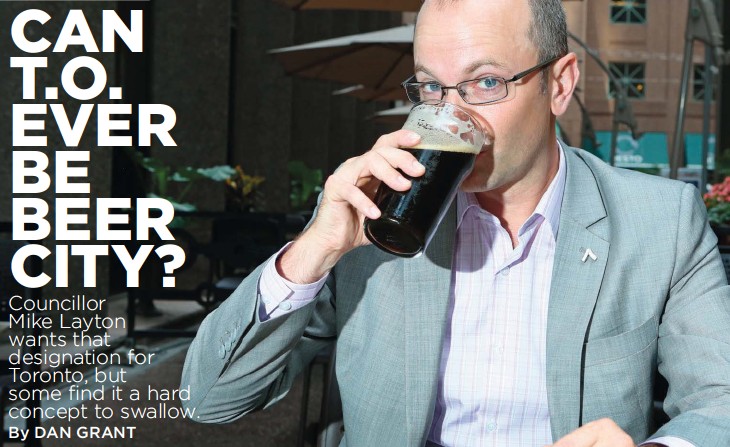 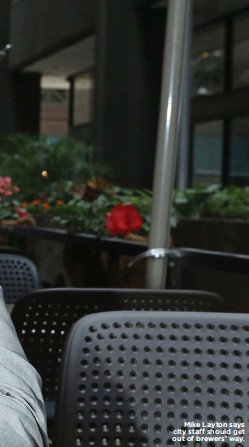 If Mike Layton has his way, Toronto will be the craft beer capital of the world. But what would that look like? Would it resemble Portland, Oregon, which boasts nearly 60 breweries inside city limits and more than 80 in the surrounding metro area? Would there be permanent beer gardens in city parks, like in Milwaukee? Would it be more like Brussels, where it’s not uncommon to have a pint with breakfast, and brewers are celebrated each year with a parade? The councillor for Ward 19 isn’t sure, but it was never really his intention to shape the industry – just to help it along. “The whole idea of the craft beer capital was really just me taking some dramatic licence in writing a notice of motion.” That motion – put forward with the support of Councillor Gord Perks (Ward 14) – was passed by the Economic Development Committee. It directs city staff to stop getting in the way of craft brewers and instead make things easier for them. Right now bureaucracy is a big problem, leading to frustrating months of expensive delays for start-ups like Lansdowne Brewery. Located at 303 Lansdowne, on the small strip where Dundas West and College meet, it sits ready for customers but forbidden to serve them, co-owner Jeremy Coghill tells me. “You can talk to planners and all these people who are really keen and gung-ho. But once you’re in a situation where you’re talking to the zoning people, they’re not necessarily talking the same way as the planners. Figuring out how to speak their language turned out to be an issue.” Coghill says the guy in charge of zoning was a hard-ass about everything. “He just kept saying no while providing no understanding about why he said no. There are all these brew pubs all over the place. How did they open? He’s like, ‘I don’t care. I didn’t approve them.’” The opening earlier this year of Left Field Brewery at 36 Wagstaff, off Greenwood near Gerrard, was held back by a bizarre bylaw demanding that manufacturing facilities have at least five parking spaces, irrespective of what is being manufactured. Left Field’s building, a former brick factory, is more than a century old and opens onto a narrow side street. “In order to get past that requirement, we went through a costly process to engage architects, engineers and city officials,” recalls co-owner Mandie Murphy. Eventually, they were granted the right to open without parking, but only after meeting with the Committee of Adjustment. “The panel that makes the decision didn’t quite say it, but their attitude was more or less ‘You shouldn’t even have to be here; this is a waste of time.’” These are the types of issues Layton hopes to fix. His motion allows him to call together staff from various departments to clarify the rules. In his opinion, brewers should be handled like bakers. “You’re making something out of raw ingredients and selling it on site, whether you’re selling to a bar by the keg or to a local by the bottle. A bakery functions in the exact same way. It’s taking raw ingredients, mixing them around.... Why are they being treated differently?” For home brewer Eric Portelance, Layton’s initiative is good news. Currently looking for a location to open Halo Brewery, he’s already spoken with Layton, Perks and his local councillor, Ana Bailão (Ward 18). He also sits on a city of Toronto working group to discuss industry issues. But as encouraged as he is by the progress being made at the municipal level, he worries brewers might be dropping the ball when it comes to Toronto’s craft credibility on the world stage. “I’ve had more off-flavours in beer in the past six months in bars in Toronto and around the province than I had in the previous six months. Quality control, quality assurance, even basic sensory evaluations just aren’t there. Some brewers are rushing their beer out because they think our market is still immature, but that’s not going to fly in a few years when people get wise to it.” Portelance points to Vancouver, which has more than 20 breweries within walking distance of BC Place, as a market that’s more evolved. “We have Toronto Beer Week. We have a calendar of events that happen around beer. But Vancouver’s moved from these blips of events on a calendar to more of an ongoing thing.” Compared with some American centres, we’re even further behind, claims Jordan St. John, former national beer columnist for the Sun newspaper chain. “I’ve done the math on this. Asheville, North Carolina, which is Beer City USA, has 45 breweries for 85,000 people. If we wanted to match that per capita, we’d need something like 1,483 breweries,” he says. The author of Lost Breweries Of Toronto, St. John nevertheless feels we could still benefit by putting a greater focus on craft beer. “You could get the same thing London, England, has, where stopping in for a pint at the end of the day is part of the daily routine. A blog by a friend of mine suggested the concept of a third place that’s neither work nor home. If you’ve got really good beer, that gives people a reason to stop off at the pub. You don’t really live in a city; you live in a neighbourhood. Anything that creates that sense of neighbourhood is a good idea.” Lansdowne’s Coghill agrees. “Maybe, as time goes by, people will see that places like ours are not the death of neighbourhoods and they’ll loosen up a bit.”