Re Canada Lowers Flags For Mass Grave Discovered At Residential School (NOW Online, May 31). What is so extremely outrageous and insulting is that religious organizations to this day still have tax-exempt status. If you donate a dime to any of the religious orders that were in any way responsible for these massacres, you are not part of the solution, you are part of the problem. If any other popular charity were found to have unexplained deaths literally in their backyards, someone would have revoked their charitable status by now. Dan Rogers — FROM NOWTORONTO.COM Mare of Easttown’s superb finale I agree with Glenn Sumi on all points in his review of Mare Of Easttown (NOW Online, May 30). The Undoing and Mare Of Easttown are both great shows. The acting is fantastic, too. This is the kind of TV I schedule. I want intelligent, superbly filmed, suspenseful programming. Well panned out by Glenn. Can’t wait till the next one! Alyson Gael — FROM NOWTORONTO.COM Public art an important part of future cityscape Re The Future Cityscape: 11 Buildings That Will Change Toronto (NOW, May 27-June 2). Great article but what about public art? There should be lots of calls for entries but I don’t see many at all in these projects. Alex Anagnostou — FROM NOWTORONTO.COM What’s the long-term plan for development in Toronto? Expansion in Toronto is happening too fast to deal with traffic. We’re also not dealing with homelessness and housing affordability. What is the big plan for the next 10-20 years? Amir Hanna — FROM NOWTORONTO.COM Housing speculation should be illegal Yay to Radheyan Simonpillai for this very clear and important article on the need for a real estate land speculation tax (NOW Online, June 5). If we can’t actually summon up the political fortitude to make housing speculation, flipping and buildings left unoccupied by absentee owners illegal, at least we ought to seriously tax those engaged in these practices. Otherwise, the province and the city will continue to be in the pockets of developers and housing will continue to be unaffordable for thousands of people in Toronto. Steven Bush — FROM NOWTORONTO.COM Raising the red flag on Nova Scotia mass shooting Re Was Nova Scotia Mass Shooter’s Replica RCMP Vehicle Intended For An Undercover Sting? (NOW Online, May 17). There has never been a mass murder where the suspect successfully avoided the police for 13 hours and the police refused to issue a warning to the general public. Journalism shouldn’t be tasked with holding the police accountable, but thank heaven they have chosen to raise the flag. That is democracy at work. Sam S. — FROM NOWTORONTO.COM Conflating Zionism with anti-Semitism Christopher Mansour has been spending the last few weeks sending in letters to the editor. It’s really impressive, actually. I would like to refute some of his ideas. First of all, if any historian has traced anything back to Abraham, that historian is a quack, as Abraham’s historicity has been all but disproven. Mansour argues that Jews have the right to the land because of some ancient prophecy and yet I assume he has no issue living on Indigenous land. Yes, anti-Semitic hate crimes must be condemned, but replacing that with Islamophobia does not make things any better. Anyone who wants to conflate Zionism with Judaism is the real anti-Semite as far as I’m concerned. SK — FROM NOWTORONTO.COM Baking with beer is fantastic, too Great article on cooking with beer (NOW Online, June 5). My favourite thing for BBQ is beer. In winter, it is a blend of beer and red wine bourguignon in my slow cooker. Recently, I learned that baking with beer is fantastic. It adds moisture and depth to quick bread and white wine sauces for a sumptuous fish dish. I do not drink alcohol but I would not be without beer and wine for cooking creations. Elaine Radu — FROM NOWTORONTO.COM 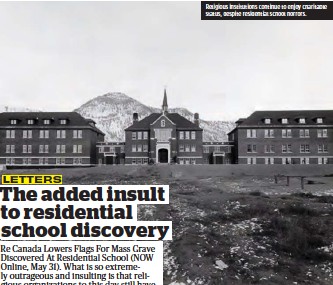