How many more died?

The discovery of the remains of 215 children at the former site of an Indian residential school in Kamloops, BC, has woken Canadians up to the horrors of a mostly neglected part of the country’s history. But it’s just the beginning. The Truth and Reconciliation Commission’s (TRC) report into Canada’s residential school system estimates that some 6,000 Indigenous children taken from their families as part of the government’s inculturation policies following confederation may have died in the 150 residential schools run by the Catholic and Anglican churches from the 1880s to as late as 1996. However, that is only a “conservative” estimate. Research conducted by Scott Hamilton of the Department of Anthropology at Lakehead University for the TRC uncovered massive gaps in the available data on residential school gravesites that suggests the number is much higher. Some church-run boarding schools for Indigenous children, for example, predate residential schools all the way back to the 1830s. Eight mission schools were operating at the time of confederation. That number grew exponentially with Canada’s purchase of Rupert’s Land in 1870 and agricultural expansion west. Officially, 3,213 children are reported to have died in residential schools. But that only represents the number for which there is official documentation. Record keeping at the schools was sporadic, says Hamilton. What is known from archival data is that enrolment at residential schools as well as boarding schools and “industrial schools” run by the government reached as high as 10,000 children per year post-Confederation. Archival information collected by Hamilton shows that the federal government did not have an official policy for the burial of children who died in the residential school system until 1958, more than seven decades after the schools to “take the Indian out of the child,” as John A. Macdonald infamously said, were first established. The Indian Act policy requiring all Indigenous children to attend residential schools was passed 40 years before that in 1920. Many of the schools were in rural and remote locations. Many of the children who died in residential schools were far from home. The long distances meant that families weren’t always notified when their children died. Also, the Department of Indian Affairs wasn’t always willing to send deceased students home for burial who may have died under suspicious circumstances – as happened with the body of a boy who hung himself at the File Hills school in Saskatchewan and was buried on the Peepeekisis Reserve instead of on the Carlyle Reserve where his parents lived. The official policy on burials uncovered by Hamilton reads as follows: “Ordinarily the body will be returned to the reserve for burial only when transportation, embalming costs and all other expenses are borne by next of kin. Transportation may be authorized, however, in cases where the cost of burial on the reserve is sufficiently low to make transportation economically advantageous.” When children couldn’t be returned to their parents, responsibility for their burial fell to the schools, which didn’t always have the money to make proper funeral arrangements, says Hamilton. Those that were given funerals were often placed in plots with no markers or in mass graves. Hamilton’s report to the TRC states that: “As in so many other aspects of the Canadian residential school system, the federal government appears to have been slow to develop a formal policy governing the burial of students who died at the schools. Instead, the burial of deceased students appears to be rather ad hoc, and varied from school to school.” What is clearer is that epidemics like tuberculosis and other communicable diseases overwhelmed residential schools that were typically overcrowded and ill-equipped to deal with health emergencies. Most only had basic health care facilities. According to Hamilton’s report, “significant numbers” of children in residential schools contracted diseases. Hamilton says that “Some students died at the schools, while other seriously ill children were returned home, or admitted to hospitals or sanatoria where some may have later died.” In 1906, Dr. Peter Bryce, the chief medical officer for Indian Affairs, noted the susceptibility of Indigenous populations to disease, writing in his annual report that “the Indian population of Canada has a mortality rate of more than double that of the whole population and in some provinces more than three times.” Tuberculosis was the most prevalent disease. But the Spanish flu and influenza epidemics also took a heavy toll. For example, Hamilton’s report recounts that all but two of the children and all of the staff at the residential school at Fort St. James, BC, contracted influenza. Some 78 people died, including students. Father Joseph Allard, who served as the school principal at the time, is recorded in Hamilton’s report as writing in his diary that not all the bodies could be given a proper burial. “Several bodies were piled up in an empty cabin because there was no grave ready. A large common grave was dug for them.” Most of the early residential schools were established within the first 50 years of confederation, when provincial and municipal governments were in their infancy and public health and cemetery regulations had not been widely established. Some residential schools had graveyards within or near the school grounds. But few of them were formally identified by provincial and territorial agencies responsible for cemetery regulation. Most of the cemeteries documented by the TRC’s work are, for the most part, abandoned. And no plan appears to have existed to provide for the maintenance of cemeteries at residential schools after they were closed. Hamilton says there was uncertainty over who was responsible for the maintenance of the cemeteries – the churches who established them or the federal government in charge of administering them. Also, some residential schools were rebuilt but not always at their original location. Some were destroyed by fire and moved, leaving fences and markers identifying gravesites behind to decay, disappear or become overgrown by vegetation and forgotten. 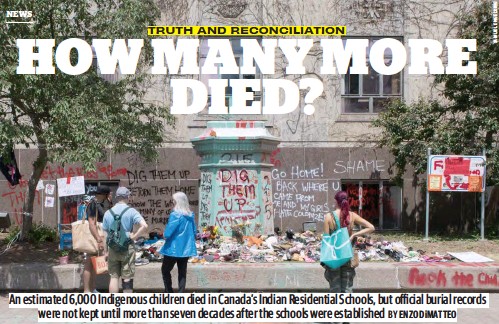