What BLACK LIVES MATTER MURAL Where SPADINA BRIDGE OVER NORDHEIMER RAVINE Why FIRST YEAR ANNIVERSARY OF THE DEATH OF GEORGE FLOYD AND REGIS KORCHINSKI-PAQUET In the heat of last summer’s protests over the police choking death of George Floyd south of the border, there was an explosion of activism in Toronto. The police custody death of Regis Korschinski-Paquet, only a couple of days after Floyd, dragged the failure of decades of policing reforms and the Toronto force’s own history of strained relations with the city’s Black communities into the spotlight. New groups following the lead of Black Lives Matter came to the fore to push both Black and Indigenous issues of self determination. Their emergence took on a life of their own, pushing discussions about police brutality and defunding police as well as the need to rethink the place of law enforcement in society into the political arena. The expressions of solidarity – and outrage – took many forms. While many marched, some took their messages directly to politicians and police. Others took their resistance to another level through the creation of art. At Graffiti Alley along the Queen West strip, some 40 artists gathered one weekend in June for a Paint The City Black event to show support for the movement. Murals of George Floyd, Martin Luther King Jr. and other prominent Black figures involved in the struggle for racial justice were spray painted in black and white along the alleyway. Such scenes were repeated around the globe and in other pockets of the city. While public spaces became the canvas to spread the word, social media pushed the message onto another plane. In Toronto, one of the more compelling works appeared in an unlikely place – under the Spadina bridge that spans the St. Clair reservoir and Nordheimer Ravine, which is named after music publisher and piano maker Samuel Nordheimer. The piece occupies two massive pillars that run the width of the base of the bridge. On the pillar facing the pathway are the words UNITY in red between I CANT BREATHE and NO JUSTICE NO PEACE in black. On the pillar behind, which can be seen through an opening in the structure, are spray painted the letters ACAB, which stands for ALL COLOURS ARE BEAUTIFUL, according to the artists of this particular piece. The initials are also known to stand for All Cops Are Bastards. The names of people “murdered or brutalized by police,” including the names of missing and murdered Indigenous women, are in white. The artists behind the mural, however, remain somewhat of a mystery. When NOW contributor Richard Longley happened by with his camera during the creation of the project back in June 2020, the artists didn’t want to give their names or be photographed. What would R.C. Harris, Toronto’s longest serving commissioner of public works, think about the mural that now adorns one of his signature projects? What would Winston Churchill think? The park above the reservoir is named after him. The residents in the affluent neighbourhoods that surround the ravine don’t seem to mind – at least a cursory check of city records does not indicate any effort to remove the mural amid a massive three-year rehabilitation of the reservoir and surrounding ravine. The mural is right across from the emergency exit of the subway tunnel. In 1995 three people were killed and others injured when a train hit another in the deadliest accident in Canadian transit history. The victims and other passengers were evacuated from the wreck through the Russell Hill emergency exit underneath the bridge. 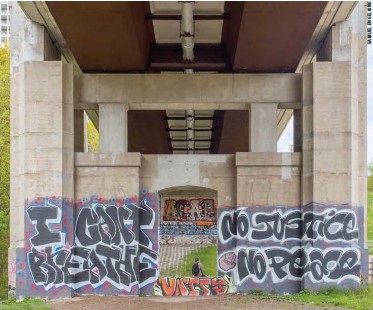 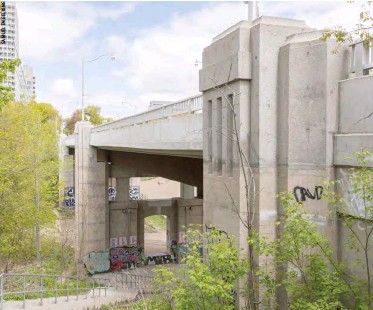