Every year it feels like there’s a new hunt for the quintessential summer cooler. Last year, the White Claw craze had a stranglehold on Toronto. The American export finally landed on Canadian shelves and the hype had people fiending for a taste of the low-calorie hard seltzer. The Front and Spadina LCBO location was the first spot in Canada to stock it and people lined up around the block on the day it dropped in late February. By the time winter had thawed, it was everywhere. This may be a controversial opinion but I don’t think White Claw is very good. The hype is largely overrated and I was ultimately let down when I first tried it. This has put me at odds with some of my closest friends but I must stand in my truth. I’d rather squeeze fresh lime juice in vodka over ice than drink something that tastes like bubbly medicine. And that’s the issue with a lot of similar products on the market: low-calorie or not, they don’t taste good. So I’ve been on the hunt for an alternative for this summer, something fruit-forward (without tasting artificial), with the right amount of bubbles – easy and crushable. These three new Canadian vodka sodas and seltzers do the trick quite nicely. Ace Hill Vodka Soda Ace Hill is often regarded as the beer that’s at every single sponsored event you’ve ever been to, so you might think of a classic pilsner when you see the logo. But its latest release is a line of three vodka sodas: lemon, raspberry and strawberry grapefruit. There’s no added sugar and they’re made from real fruit juices (and they actually taste like it). I’m partial to the raspberry which is sweet and tart like raspberry sorbet but doesn’t taste like drinking dessert. Perfect for a park hang or romantic picnic. • Ace Hill, Toronto. $2.80 per 355 ml can. Get it at the LCBO (lcbo.com) Sway Vodka Soda Sway is the fun girl at the party. She’s bubbly and friendly and you want to keep hanging out with her. The cans are multicoloured and whimsical and even the flavour names – Raspberry Shimmy and Lemon Love – feel effervescent and lively. I’ll admit when I first tried them, the branding suggested something on the overly sweet side, but the taste is far from. The drinks are light and refreshing and go down a little too easy. Perfect for a night spent laughing with friends. • Squeeze’D Beverages, Ontario. $2.75 per 355 ml can. Get it at the LCBO (lcbo.com) Sapsucker The Lime Vodka One Sapsucker is known for citrus-flavoured carbonated tree water. What’s tree water? Basically, it’s water harvested directly from Canadian maple trees. This is what gives it natural sweetness without added sugar. This product is the company’s first alcoholic bevvy and it tastes like what White Claw wishes it tasted like. As soon as you pop the tab, the bright zing of lime hits the air. Balanced, lightly sweet and very citrusy, the taste is of freshly squeezed limes. The carbonation is more subdued than the other cans on this list but The Lime Vodka One works because Sapsucker is all about the flavour. This has backyard barbecue or day at the beach written all over it. • Niagara Falls Craft Distillers, Ontario. $2.95 per 355 ml can. Get it at the LCBO (lcbo.com) 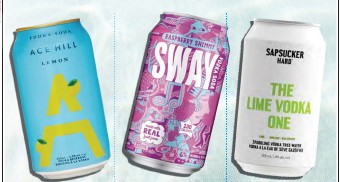