POWER UP YOUR PICNIC

Patio season may be around the corner but picnics are still all the rage. For many restaurants, popping up near parks or offering delivery directly to parks has been a necessary business move as the weather warmed up but patios remained closed. And since patio tables can only seat a max of four people under Ontario’s reopening plan, park meets are still essential for larger groups of people who don’t live together to hang out. Recently I’ve been invited to more picnics and outdoor hangs than I can count – definitely more than in pre-pandemic life. Obviously, our options for socializing are slim at the moment. People can fall back on tried-andtrue picnic recipes but it’s been a challenge to find some novelty when every weekend feels like a repeat of the last. As a picnic-goer it can also be a bit cumbersome lugging your basket and cooler and coordinating with friends about who is going to bring what. After a few unfortunate spills in your favourite tote bag or sandwiches getting squished before you even get to your picnic spot, having someone else prepare all the food becomes even more enticing. Why not have a refined and upscale meal at Trinity Bellwoods? Or try some Indian street food while people-watching at Grange Park? Or have an entire five-course dinner delivered to you at Riverdale? All in the same weekend? Here are six restaurants with picnic-ready menus to help take the load off and give your taste buds something more exciting than finger sandwiches, pasta salads and veggies with dip. Butcher by Nature For those who love to nosh, Butcher by Nature’s charcuterie spreads are the way to go. They come in pre-packaged boxes with everything laid out artfully for the “phone eats first” crowd. They do five different sizes, the smallest feeding two people and the largest enough for 12 as an appetizer. They didn’t spare a single thing – even the small one is overflowing with a bounty of imported and locally sourced cheeses, cured meats, fresh bread, fruits, jams, honey, homemade brittle, taralli, crackers and more. Near: High Park North ß 515 Annette, butcherbynature.com Il Fornello Capitalizing on its proximity to one of the best views in the entire city, this Danforth institution is offering a sunset dinner delivery experience at Riverdale Park. The Italian restaurant’s entire menu is available for delivery directly to the park after 5:30 pm. Il Fornello has set up an outpost where you can use a QR code to place your order and return your garbage after – they will dispose of it for you to mitigate littering. Their Neapolitan-style pizzas, mussels, calamari fritti, rigatoni bolognese, classic spaghetti pomodoro or penne alla vodka could turn a casual hang into a romantic date night. Near: Riverdale Park East and Withrow Park ß 576 Danforth, ilfornello.com La Palma La Palma’s ready-to-eat meals for two are a touch more elevated than typical picnic fare, but since you don’t have to worry about preparing it yourself, why not indulge? The menu changes every weekend and recent offerings include beef tartare, focaccia with tomatoes and provolone, shrimp wraps, watermelon salad and vanilla panna cotta. Keep your eyes peeled on Instagram where La Palma hints at the next week’s menu items in advance. You can also add on bottled cocktails, like the onelitre La Palma Iced Tea made with bourbon, rinquinquin, orange pekoe and lemon. Near: Trinity Bellwoods Park and Alexandra Park ß 849 Dundas West, lapalmato.myshopify.com Stefano’s Sandwiches Stefano’s is the brainchild of the owners of Ufficio, an upscale Italian restaurant on Dundas West. When they noticed a drop in orders for more complicated or refined menu items, they realized people were craving comfort food and launched a range of vegan sandwiches. It was an instant hit and Stefano’s was born. For the summer, they’ve launched a picnic kit for two. It comes with two of their plant-based sandwiches (the vegan fried chicken is sublime), potato lentil and baby gem salads, olives and seasonal fruit. Near: Trinity Bellwoods Park and Lakeview Avenue Parkette ß 1214 Dundas West, stefanossandwiches.com The Skyline Restaurant If you’re in the mood for nostalgia, Skyline’s grab-and-go weekend menu is the option for you. The retro diner is selling jumbo hot dogs and hamburgers, milkshakes, (booze optional) freezies and more items reminiscent of a childhood backyard birthday party. Grab a picnic bag and blanket and transport the potato salads, coconut cream pies and ice cream to the nearest park. And for the grown ups, they have bottled pina coladas, mojitos and sangria. Near: Sorauren Avenue Park and Lakeshore Boulevard Parklands ß 1426 Queen West, theskylinetoronto.com Thindi Cafe Thindi is doing pre-set Indian street food picnic boxes. Each comes with sandwiches, bite-sized snacks and sweet treats from their menu like vada pav, a deep-fried potato dumpling stuffed in bread with housemade green and dry garlic chutneys. Other snacks include Maggi samosas, pizza grilled cheese sandwiches, cold cucumber sandwiches and besan ladoo for dessert. The boxes are currently available at their location on College but not their express spot in the World Food Market near Yonge and Dundas. Near: Alexandra Park and Grange Park ß 400 College, thindi.ca 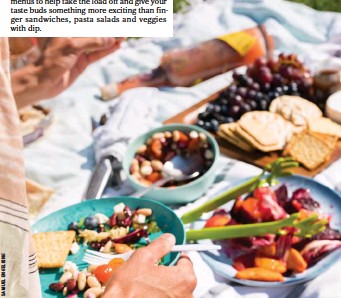