SHOWS DELIVERED TO YOUR DOOR

Composer and lyricist Britta Johnson never thought she’d be making musical house calls. But she’ll be making many of them this summer, since she’s involved in not one but two porchside programs. With arts lovers fed up with looking at their laptops and protocols around live performance shrouded in confusion, bringing shows to people looks to be the summer’s hottest trend. Other intimate porchside events this summer include Tapestry Opera’s Box Concerts and the screen-your-own-outdoor-movie experience Tiny TOPS. Johnson’s first gig is as composer and accompanist for Sad Lady Songs!, part of Musical Stage Company’s second annual Porchside Songs series bringing musical theatre artists right to your door. (Dates TBA, see musicalstagecompany.com.) The second is as composer/writer/performer in Outside the March’s Stupidhead!, an inperson revival of her musical with Katherine Cullen inspired by Cullen’s experiences living with dyslexia. “When the pandemic hit, I thought it might be an opportunity to write a lot, but I’ve felt flatlined and not connected to things,” says the Dora Award-winning composer of Life After. “I haven’t had a lot of inspiration. But these summer projects feel promising. They’re lifegiving. And it’ll be great to see people.” Johnson performs her Porchside program with the gifted musical theatre performer Sara Farb (Fun Home, the recent Broadway hit Harry Potter And The Cursed Child). The two were to have debuted their new musical Kelly V. Kelly in 2020. But of course, it was cancelled because of the coronavirus. “We were making a few changes before rehearsals, but we were all ready to get into it,” says Johnson, who wrote the music and lyrics, with Farb supplying the book. “I think there’s every intention for it to happen eventually. I just hope it’ll be as soon as it can be.” Porchside viewers will get to hear a couple of songs from Kelly, other original compositions that fall under the genre of “sad lady songs,” plus some covers by masters of the genre like Joni Mitchell. Stupidhead! will be performed this summer in two ways. There will be the live version for people with porches (starts July 20), but there will also be a livestreamed version presented like an old-fashioned radio play (starts July 7; see outsidethemarch.ca). “I think the show lends itself really well to this so-called radio presentation, because it’s a storytelling show and you get a real sense of intimacy with Katherine. It’ll be different every night. We’re still working on it, but it almost feels like a live comedy special you’d listen to on Spotify.” One of the most striking things about the original 2017 staging of Stupidhead! was Anahita Dehbonehie’s set design. Will that be adjusted for an outdoor performance? “As with everything during COVID, you need to come up with 10 different versions of something,” laughs Johnson. “Anahita and designer Nick Blais are creative people. There will be versions if more space is allowed, or less space.” 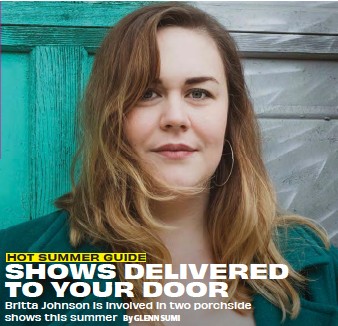