WHAT TO WATCH THIS WEEKEND

IN THE HEIGHTS (Jon M. Chu) In The Heights is so joyous, vibrant and visually wondrous that it mostly gets away with having next to no plot. The adaptation of Lin-Manuel Miranda’s breakout musical is a loving bachata and hip-hop swan song to the Latinx community in Washington Heights, who are largely Dominicans, Puerto Ricans and Cubans. The movie is overloaded with a winning cast and knockout musical numbers, all celebrating the culture in a community feeling the strain of gentrification. A win for some of these characters is their ability to find themselves in the exact same place, from beginning to end, which is also what makes the movie so dramatically inert. The main conflicts involve characters watching clocks or calendars, wondering how much longer they’ll continue living or working in the neighbourhood, which can be rather trying when the movie itself is two-and-a-half hours long. But we’ll be cherrypicking our fave numbers, all amplified by Chu’s visual bravado, and playing them on a loop all summer. The standout set pieces include a pool party eruption of 96,000, the rousing, comic and melancholic celebration in Carnaval Del Barrio and the jaw-dropping table-setter, In The Heights. 143 min. Available Friday (June 11) as a premium VOD rental on all digital platforms. NNN (radheyaN SimoNpillai) THE AMUSEMENT PARK (George A. Romero) Commissioned in 1973 as an advocacy project by the Lutheran Services Society of Western Pennsylvania – with the expectation that it would air on television – The Amusement Park was instead shelved by its producers and lost for almost half a century, only to be rediscovered after Romero’s death. Newly restored and remastered, it premieres on Shudder this week – and it’s going to confound a lot of people. While it’s certainly disturbing, The Amusement Park isn’t a horror movie in any conventional sense: it’s a heavyhanded allegory about a senior citizen (Lincoln Maazel) whose trip to a bustling fun fair becomes a nightmare of alienation, confusion and abuse. Its pace is measured rather than frantic, drawing on the same quasi-documentary approach that makes Romero’s Night Of The Living Dead so subtly unsettling. If you’re looking for shocks, you won’t find them here, though the director’s fans will certainly recognize the fascination with institutional failure and human frailty that runs through his best work. And as such, The Amusement Park is as essential to understanding Romero’s evolution as Martin or Dawn Of The Dead. 52 min. Now streaming on Shudder Canada. NNNN (NormaN WilNer) LOKI (Michael Waldron) On its face, the premise of Marvel’s latest limited series is awfully complicated, relying on branching timelines, alternate versions of beloved characters and introducing a whole new layer of reality to the cinematic universe. But the only thing that really matters is that Tom Hiddleston’s trickster god Loki, who was killed in the opening scenes of Avengers: Infinity War, is alive and well and at the centre of his own show, working with the Time Variance Authority (never mind) to protect the “sacred timeline” (never mind) from an even worse threat. Writer/producer Waldron and director Kate Herron have created the sci-fi version of The Blacklist or Hannibal, with (time) cops recruiting a master criminal. And once that simple trajectory is established, everything else snaps into place and we can just sit back and enjoy the ride, appreciate the amazingly on-point 70s production design and a supporting cast that includes Gugu Mbatha-Raw, Wunmi Mosaku, Eugene Cordero, Sasha Lane and the voice of Pretty Hard Cases’ Tara Strong. If nothing else, it’s a pleasure to see Hiddleston annoying each and every one of them. New episodes every Wednesday on Disney+. NNNN (NW) 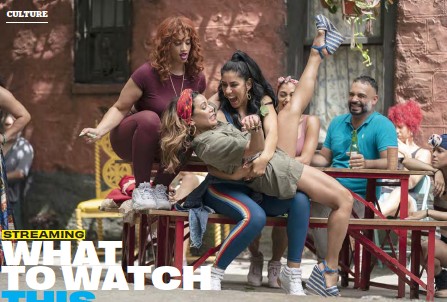