During the first year of the pandemic, the city built 30 kilometres of new bikeways but is already reverting to its historically plodding pace 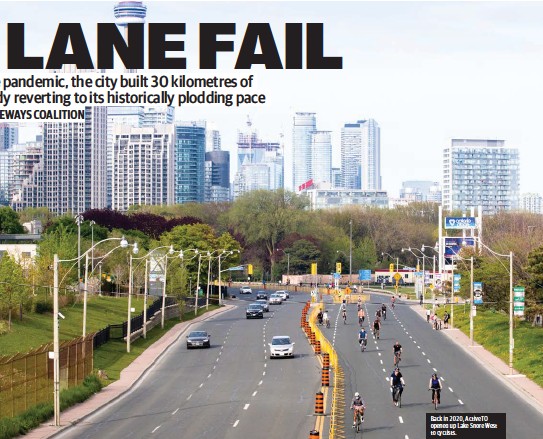 Fifty years ago, Metro Toronto, now the City of Toronto, experienced a “Bicycle Boom” – a wave that formed on the U. S. west coast then moved eastward across the continent reaching Toronto with full force in 1971. City residents were again embracing the bicycle for everyday travel. One thing, however, quickly became clear: there were few safe places to ride a bike. The local government, reluctantly at first, then with more energy in later decades, settled upon the idea of accommodating cyclists with on- street bikeways. The first boulevardlevel bike path was installed on Eglinton Avenue in 1972 and the first bike lane on Poplar Plains Road in 1979. Now, for the first time in the half- century since the Bicycle Boom, a comprehensive, Toronto- wide evaluation of utilitarian cycling facilities has been conducted by the Toronto Community Bikeways Coalition. How does our cycling infrastructure rate in terms of quality, safety, connectivity and utility? Where is the city doing well, and where is there room for improvement? Evaluations were completed for 217 km of bikeways with 78 individual report cards. More than 42 kilometres ( excluding contra- flow bike lanes) were marked as “poor,” 74 kilometres of bike lanes rate as mediocre, 40 kilometres are “good” and 51 kilometres ( which includes the waterfront route of 22 kilometres) are considered “very good.” Fifty- six per cent of bikeways were assessed as mediocre or poor. Among the worst bike lanes were Bay Street, Davenport Road, St. Dennis Drive in Flemingdon Park, Finch Avenue West in North York, Steeles Avenue East in Scarborough and Royal York Road and Renforth Drive in Etobicoke. These bikeways had various gaps, often ended abruptly before intersections, offered no level of protection from cars and trucks, put cyclists at risk of being doored, or didn’t connect with other bikeways. Yonge Street, Shuter Street and Crescent Town Road, among others, received high marks for their continuous safety barriers, consistent pavement markings and for connecting cyclists to TTC, shopping, libraries, schools and work. “Much of the city’s cycling infrastructure is now 10, 20, 30 and even 40 years old, but while the city slowly brings outdated bike lanes up to modern standards, it continues to fall behind other cities in building a cycling network to attract new riders,” said Mary Ann Neary of the Toronto Community Bikeway Coalition. Off- road or recreational cycling trails, which the city generally classifies as “multi- use trails,” were not evaluated. These trails have limited utility for everyday cycling for a variety of reasons, including the fact that they are typically not lit at night, have relatively few access points, are often awkwardly ( but legally) shared with people on foot, involve meandering routes or steep inclines or descents at access and exit points, suffer from large gaps, and are not maintained year- round. There are a few exceptions. The waterfront “route,” for example, is made up of large sections of recreational trails along the lake, connecting directly to boulevard- level bike paths on Lake Shore Blvd and Queens Quay. The report weighed quality and safety on one hand with utility and connectivity on the other. A bike lane may, for example, offer safe passage, but if it is hidden away in a location where no one will use it, its grade will suffer. In the same way, if a bike lane is along a popular route with attractive destinations but offers little protection to cyclists from heavy and fast- moving motor traffic, the grade for the bikeway will again suffer. The danger from road construction came up. However, since these road projects are temporary, the focus was on underlying issues that will persist after the completion of road work. The evaluations demonstrate that much of our cycling infrastructure is sub- standard, thus suited only to the most confident riders while discouraging other potential riders such as youths, seniors and other vulnerable residents; or it is located on streets with few appealing destinations. This report card demonstrates a large backlog of bikeways in Toronto in need of significant upgrades. In fact, even bikeways rated as “good” or even “very good” had obvious, identified safety deficiencies that should be addressed. Toronto has already fallen significantly behind Montreal and other leading cities around the world in cycling infrastructure, and risks falling further behind if time and resources available for new bike lanes are drained by upgrading old bike lanes. The COVID- 19 pandemic reminded people of the value of bicycles for everyday transportation. The pandemic aside, there is a growing appreciation of the bicycle as a valuable component of an efficient urban transportation system that not only allows people to get to their destinations, but also addresses urgent problems of climate change, public health, equity and road safety. During the first year of the pandemic, the city built 30 kilometres of new bikeways but is already reverting to its historically plodding pace. “The city knows how to build modern cycling infrastructure – the new bike lane on Yonge Street is a good example,” says Albert Koehl, an organizer of the project. “But the drain on resources to update old cycling facilities is putting us further behind other cities in creating a modern cycling network.