After two years of virtual events, the Toronto International Festival of Authors’ Roland Gulliver launches a three- day festival devoted to the crime and mystery genres 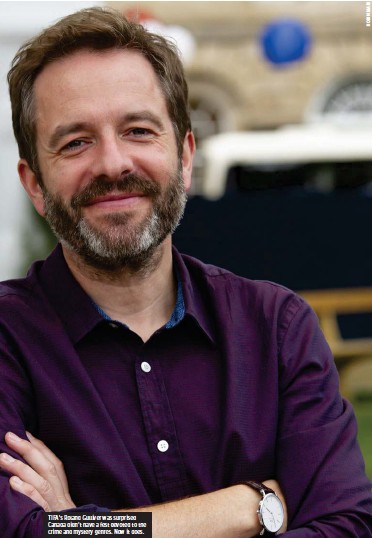 To say that Roland Gulliver is looking forward to the inaugural MOTIVE: Crime & Mystery Festival would be an understatement. After all, he began his job as director of the Toronto International Festival of Authors in February 2020, a month before the world shut down. And so, while he's overseen two successful virtual editions of TIFA'S autumn literary festival, he has yet to experience the in- person readings, interviews, signings, parties and everything else that goes on during a big book event – at least here in Toronto. For more than a decade, Gulliver was the associate director of the Edinburgh International Book Festival. MOTIVE is, in fact, the realization of a twoyear dream. “When I arrived in February, one of the things I did was ask everybody I met about their favourite writers, who they were reading,” says Gulliver on a Zoom call. “I love asking that question and getting recommendations for books, which is essentially what a literary festival is – it's people recommending books, many times over. One of the things I quickly realized was that Canadians were very, very passionate about crime and mystery authors – both their own writers like Thomas King, Shari Lapena and Linwood Barclay, and others around the world.” He was a little surprised that Canada didn't already have a festival devoted to the crime and mystery genres, pointing out the UK'S Bloody Scotland, Harrogate, Crimefest and Noirwich. “One of the things I wanted to do was open up the idea of what the festival is,” he continues. “Historically, people maybe felt that TIFA was a little too remote. Some people talk about literary festivals not being for them. So I wanted to try and see what a genre- specific festival would be.” While the aforementioned superstar authors King, Lapena and Barclay are all part of the three- day fest – along with Kathy Reichs, Val Mcdermid, Harlan Coben and Walter Mosley and a whole slew of Nordic Noir writers ( Gunnar Staalesen, Thomas Enger, Lilja Sigurdardottir) – there will also be events that reflect the additions Gulliver has made to TIFA in the past two years. His interest in integrating performance and music can be found in The Hidden, the interactive, all- ages mystery show taking place in Brampton libraries, and the Fun Lovin' Crime Writers In Concert, a rock ' n' roll super group consisting of crime scribes. There are also master classes, events for kids and a series called Critical Conversations, about everything from the ethics of crime writing and the science of crime scene investigation to the hot- button topic of policing. “After 2020 and the Black Lives Matter protests and the death of George Floyd, it would have been really insensitive not to look at issues around crime, policing and justice,” says Gulliver. Critical Conversations: Policing Today features sociology professor Julius Haag, Mohamed Shuriye, manager of policing from for the City of Toronto, and Norman Taylor, the program director of the Global Studies Program for the Canadian Association of Chiefs of Police, all moderated by the Toronto Star's court reporter Alyshah Hasham. “There have been lots of conversations about how to represent police in fiction,” says Gulliver. “Ryan Gattis's book The System is about two men going through the judicial system. Having conversations about policing and judicial reform are important.” In a way, the timing for MOTIVE couldn't be better. True- crime podcasts and TV shows are hotter than ever. Why does Gulliver think crime is in the zeitgeist? “I think people really want to get deeper into a story,” he says. “We want more substance than you can get from an article. That's also why people love books and book festivals. You get deeper into topics you might see on the news, for example. One of our events is a panel with Paul Palango, whose book 22 Murders looks at the 2020 mass shooting in Nova Scotia, one of the most horrific events in recent memory, and Félix Séguin and Eric Thibault, who wrote Inside The Montreal Mafia. “To be able to hear in- depth analysis that goes beyond what we've read in headlines is fascinating. I also think writers humanize history and crime. Someone like the great Toronto true crime writer Charlotte Gray lets us connect with historic figures in an exciting way.” And how does he keep up with current writing? Does he have a dozen half- finished books spread around his home? “My partner gets slightly exasperated by these little piles of books that grow,” he says, laughing. “While I was working remotely, one of the things that frustrated me was I couldn’t get my hands physically on the books. That makes such a difference. You get to know books as physical things – they sit on your desk like memory stones to remind you that you need to get on it. So there are a lot of half- finished books around, a lot of talking to people about their recommendations, reading book reviews, going into bookstores. “Even if I’ve spent all day reading books and talking about them, I love going into a bookstore and seeing them in their natural setting, seeing what’s popular, seeing what the staff recommend and what people are buying. That’s all really fascinating. You just get all these different reference points to find out what people are excited about.” There’s no mystery why he’s heading up this festival.