RECLAIMING THE NARRATIVE ON DIXON ROAD 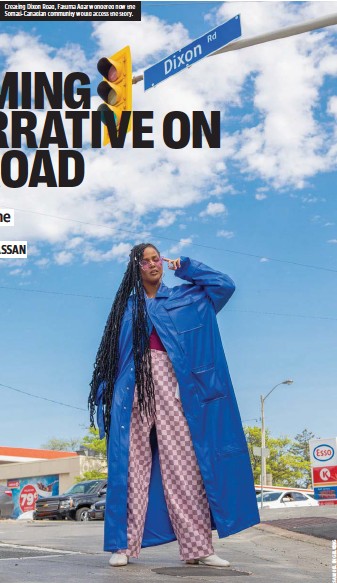 DIXON ROAD book, music and lyrics by Fatuma Adar, directed by Ray Hogg. Presented by Musical Stage Company and Obsidian Theatre Company, in association with Canadian Stage at the High Park Amphitheatre ( 1873 Bloor West). Previews from June 3, opens June 9 and runs to June 19. $ 5-$ 49. canadianstage. com For decades, the small neighborhood Dixon, located in the city's west end, has endured unfair narratives. Once known as a hub for affluent white families, by the early 1990s it became a place of refuge for Somalis fleeing war — and this instantly created tensions for the community. In 2013, after Toronto's incumbent mayor Rob Ford was caught on video smoking crack cocaine, the neighbourhood was pulled into the political aftermath. But one writer wants us to see the community for what it is. Fatuma Adar developed Dixon Road at the Musical Stage Company and Obsidian Theatre Company. The multifaceted musical tells the story of a family that settles on Dixon Road after experiencing a civil war in Somalia. “It was difficult for me to do the research that I had to do and see all of that,” Adar tells NOW over a video call. She just finished a day working at Istar Restaurant. We're reflecting on anti- Somali sentiments that have been prominent in the city, especially after Ford's crackgate criminalized the neighbourhood. She's holding back tears as she speaks. “I know that story… I've seen how we have been portrayed in the media, and it's hard.” Adar — who is a writer, playwright, and Dixon native — is compelling the city to reimagine the narratives and tropes of her former home neighbourhood through her musical. Combining music, lyrics and literature, Dixon Road obliges us to engage the misunderstood and historic neighbourhood from another lens. “Dixon is such a historical landmark for the Somali community,” Adar contends. “It's the first place that we settled. If it was any other community, there probably would have been a plaque by now.” Imagining herself in the world of theatre was once impossible for Adar, who seldom had access to popular culture outside of what was on select TV channels. “That is where my family would base outside culture. I really [ couldn't afford] to go to the movie theatres, aside from once or twice a year, let alone being able to afford theatres.” Adar took a leap with her career in 2017 when she moved to New York City and joined the third cohort of The Bars Workshop at the Public Theater. The program was run by Daveed Diggs ( Lin- Manuel Miranda's Hamilton) and Rafael Casal ( HBO Def Jam Poet). She was also long- listed in CBC'S Creative Nonfiction Prize. Earlier this year, she was nominated for a Canadian Screen Award ( Best Web Program or Series, fiction). But it wasn't until she witnessed Miranda's In The Heights, based on a book by Quiara Alegría Hudes, that she saw musicals situated in a marginalized neighbourhood and community as a possibility. Soon after, she began writing Dixon Road. “I didn't see a lot of theatre growing up. I wasn't sure what that world held for me. But I've always loved musicals because it is a theatrical medium that somehow crossed over to film and television.” Adar's way of subverting a tradition once considered “high culture” is by tackling the stereotypes of communities rendered invisible, as she did in her recent musical, She's Not Special, which is about the commodification of Black trauma in the theatre space. When creating Dixon Road, the playwright wondered how her community would access the story, let alone feel received in a historically white medium. “Theatre is not really something that our community has embraced — and why should they?” Adar asks. “They have not seen their stories on the stage. It isn't accessible.” But the institutional barriers Adar has identified in the world of theatre showed up in the process of making Dixon Road, particularly when it concerned casting. Despite all attempts, she was unable to locate Somali actors for the musical. “I wrote it imagining Somalis in a Somali house. And, as you continue with work, you start realizing that there are certain systems that haven't been set up for that to happen. “How are Somali folks going to know that musical theatre is a thing that they can do without a show about them existing at all?” Despite this hurdle, Adar selected a cast that has actively engaged her direction about how to depict Somali culture and lifestyle. Growing up in a Black diasporic city has been enough to support Adar through a difficult and isolating trajectory. “The artistic community in Toronto is filled with some really lovely folks. Lovely and supportive.” That support has also been offered by other artists who once lived in Dixon, such as K'naan. “I felt really grateful that he was the first person I was able to connect with that was from my community and also a storyteller that I admired. [ It meant a lot to me] for him to say ‘ what you're doing is great — keep going.'” Over the years, the two stayed in touch, and the artist maintained support for the emerging playwright. “If those people didn't tell me that I was good, I probably wouldn't keep going.” But Adar did, and through the comedy and music in Dixon Road, she is compelling us to sit with difficult conversations. “I think it's very Somali to find the humour in the darkness,” she says. “Even the hardest of troubles are met with lightheartedness as a form of survival.”