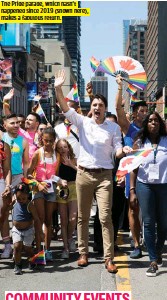 Show your colours at Pride We could put together a whole separate guide for the month- long Pride 2022 festivities, which kick off on June 8 with The Fierce & The Reckless party at the El Mocambo, hosted by the House of Monroe, and wraps up with the return of the parade on June 26. Between that there’s a litany of parties, shows and a drag brunch. The 519 is hosting their Green Space Festival on the final weekend at Barbara Hall Park, where drag queens, DJS and performers will electrify the outdoor crowds. Those shows will coincide with the much- heralded headliner performances over Festival Weekend. So Mi Like It singer Spice aka the “Queen of Dancehall” is performing at the opening ceremony. Soca star Patrice Roberts will be jumping up atthe Black queer event Blockorama. Canada’s Drag Race’s inaugural winner ( and former NOW cover star) Priyanka will perform her EP Taste Test on the main stage at YongeDundas Square. ° To June 26 at various arious locations. pridetoronto. com Celebrate the summer solstice at the Indigenous Arts Festival Housing and support organization Na- Me- Res hosts Toronto’s annual Pow Wow in recognition of National Aboriginal Day and the summer solstice on June 18. The Pow Wow will include traditional dancing and drumming, along with a feast of tacos and corn soup with bannock. The Pow Wow takes place on the first day of the Indigenous Arts Festival at Fort York. Those visiting the second day can enjoy an Indigenous food market and main stage performances. ° June 18- 19 at Fort York ( 250 Fort York Blvd). toronto. ca/ iaf Wine down the road at Toronto Caribbean Carnival The tabanca was real. Carnival chasers went two years without the road – in Toronto and ( due to travel restrictions) in the West Indies. All that pent- up energy led to more creativity. The band launches went down. The bejewelled costumes are finer than ever. A few sections are already sold out. Some are still wary about leaving their social bubbles to catch a bubble wine on the road ( typically those who never caught COVID- 19). But most of the carnival community is ready to get on bad at the Grand Parade or at the fetes where soca artists like Preedy, Nailah Blackman and Machel Montano will perform. ° July 28- 31 at various locations ( Grand Parade July 30 along Lake Shore West; kids' events July 10 and 16). torontocarnival. ca Let’s go ( back) to The Ex The Canadian National Exhibition, or Ex, has always been one of the markers of summer in the city. After two pandemic cancellations, it’s back on, as announced by Mayor John Tory in March. Full details about the huge fair haven’t yet arrived, but expect strange foods, a crowded midway and, most importantly, the feeling that life is almost back to normal. ° August 19 to September 5 at Exhibition Place ( 210 Princes' Blvd). theex. com Sample some dim sum at the Toronto Chinatown Festival Toronto’s Chinatown was devastated early on in the pandemic, especially with the rise in antiAsian sentiment. So what better way to support one of the city’s most vibrant neighbourhoods than by visiting this free two- day summer festival? The all- ages event features music on two stages, games, displays, a lion dance parade, draws and, of course, more than 30 booths offering up delicious food. ° August 20- 21, Spadina and Dundas West area. chinatownbia. com Geek out at Fan Expo The cosplay itself is a reason to get in on the action at Toronto’s festival of comic and gamer geekdom. But this year’s starry guest lineup is an even bigger draw. Star Wars fans can expect Anthony Daniels ( C- 3PO) alongside actors from The Mandalorian ( Carl Weathers and Giancarlo Esposito) and The Book Of Boba Fett. Star Trek fans will see Levar Burton and William Shatner, and the entire shire ( Elijah Wood, Sean Astin, Billy Boyd and Dominic Monoghan) will represent Lord Of The Rings. They’ll be joined by the casts of Clerks, Cobra Kai, Legends Of Tomorrow and more. ° August 25- 28 at the Metro Toronto Convention Centre ( 255 Front West). fanexpohq. com