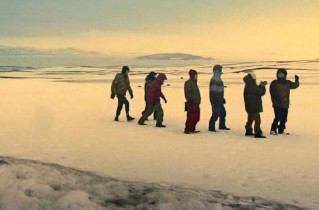 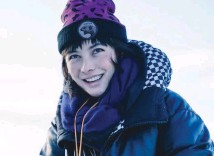 As much as she loves Hong Kong, Josie Ho willingly acknowledges that there can be challenges living in a city that’s the eighth most densely populated on the planet, and the most expensive to live in. “Hong Kong is super dope if you can find your niche,” the iconic actor and musician enthuses. “But for a family of four or five living in a 300- square- feet- and- under apartment it does start to get hyper- intense. Imagine your brother, your sister, your mother and father all in a 300- squarefeet place. And we haven’t even touched on the ripped rooms!” So, while Hong Kong is one of the world’s greatest cities, it’s also one of the most intense. That provides a leaping off point for Finding Bliss: Fire and Ice, an inspiring documentary where a group of perpetually stressed Hong Kong creatives— including well- known musicians, actors, and students— are transported to one of the most famously happy places on Earth: Iceland. From government crackdowns on student protestors to the COVID- 19 pandemic and accompanying lockdowns, Hong Kong has faced unprecedented stresses over the past few years. But Ho notes that Finding Bliss: Fire and Ice— which comes from her celebrated 852 Films production company— has roots that go deeper into the past. “We started this documentary before the social issues and the pandemic,” Ho says. “The fear and resentment of the Hong Kong people stem from the hyper- intense pace and the jam- packed population density of Hong Kong, creating an extreme pressure- cooker environment. For locals you add to that the governance by the Chinese, the English, and the Japanese, and you have a psyche that is quite confused and scared.” The question that Finding Bliss: Fire and Ice asks, then, is whether it’s possible to change the mindset of a group of people by immersing them in a new culture. Iceland— population 346,000— is consistently ranked as one of the top three happiest places on the planet by the World Happiness Report— a United Nations initiative where respondents rate their life quality. Hong Kong meanwhile came in 81st this past March— one spot behind Russia. For Finding Bliss: Fire and Ice, artists ranging from Hong Kong rapper and graffiti artist MC Yan to BMX icon Jimmy Mak to members of Ho’s musical project Josie Ho and the Uni Boys were approached. All were asked if they’d be interested in going to Iceland to hang out and jam with musicians there. “The process was quite organic,” Ho reveals. “The musicians we chose in the film were basically musicians I’ve worked with before. In general Hong Kong people are quite reserved, so there was no need to handpick a certain type of personality to go. When I was playing with my band I noticed that for a large part they’d stay in one spot and just nod their heads.” Once the artists chosen for Finding Bliss: Fire and Ice landed in Iceland, they discovered that the reason for the trip was a little different than they’d been led to expect. With Hong Kong comedian and actor Jim Chim on hand to guide things, the documentary’s high- achieving, and often- stressed, cast members find themselves in workshops designed to reshape their life perspective through buffoonery and seemingly nonsensical games. Eventually, the walls come down and the assembled artists learn there’s more to life than the hustle and grind that comes with working tirelessly in a pressure- cooker city. In one of the movie’s most poignant moments, we see student Yvonne Wan, who is intensely devoted to her career in Hong Kong, head out onto the street in Iceland and bust loose, singing for the simple joy of singing. The message is as clear as it is life- changing: forget money and fame— nothing feels better than making a connection with our fellow human beings. “Through the whole film you end up finding out about why Icelanders are so happy,” Ho says. “This is because they realize the value of people is the only thing you have. Icelanders’ biggest challenge is the weather– any moment the roof of the house can be ripped off and your house is gone! Materialism means nothing then. People matter.” Consider that a lesson not only for the endlessly overwhelmed people of Hong Kong, but indeed for everyone currently stuck in an endless loop where all that seems to matter is work and the accumulation of things that, at the end of the day, few of us need. Asked what message she wishes to convey with Finding Bliss: Fire and Ice— which she calls a “delicate gift to humanity’— Ho doesn’t hesitate. “We hope they can get a sense of something different with all the rhetoric out there,” she says. “A sense of something simple, compassionate and loving.” Josie Ho’s movie, Finding Bliss: Fire and Ice had its North American premiere at the 2022 New York Asian Film Festival ( NYAFF). The festival’s 20th anniversary event and the first in- person festival after two years. NYAFF took place July 15th- 31st, 2022 at the Film At Lincoln Center & Asia Society in New York City.