Breaking Into The Movies 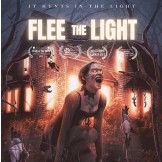 As Jennifer Mancini learned during her long journey to get her film Flee The Light to the screen, breaking into the movie business isn’t always easy. Af ter graduating from university with an engineering degree, the Toronto- based writer and president of Mythic Trips Enter tainment quickly landed a well- paying corporate job that had her travelling the world. “I had no complaints,” Mancini says with a laugh. “Then at one point I got this idea to write Flee The Light, thinking that it wouldn’t take long – maybe a couple of months. I figured I’d write a script and see where it goes. It ended up taking 10 years, and being much, much more dif ficult than I had anticipated. It became an all- consuming activity where I ended up quit ting my job to work full- time on the script.” Today Mancini’s leap of faith has paid of f with Flee The Light, a mystical and meditative horror film that has a psychology student trying to make sense of visions that are terrorizing her sister. As the movie progresses, the unravelling of past- life memories leads the siblings to a small town where things take a terrifying and horrific turn. Flee The Light has drawn praise for its thoughtful exploration of reincarnation and the of ten- misunderstood world of witchcraf t. Writing the film was only the beginning of Mancini’s journey into the world of moviemaking. Af ter the script was completed and financing was secured, shooting was suddenly derailed by the first wave of the COVID- 19 pandemic. When filming commenced right af ter lockdown was lif ted, Mancini realized that she had finally transitioned into a new career in the enter tainment industry. “The film became a career in the sense that I didn’t just write a movie,” she recalls. “I was producing it, I had a production company, and had other people wanting me to produce their movies. Four teen years af ter I lef t my job, almost to the day, I woke up and went ‘ Wow, look at this. I have a production company with a slate of projects, and all these relationships in the industry.’ There were horrible years of uncer tainty where I’d go ‘ Nobody is waiting for this script, Jennifer.’ It was really, really tough, with that uncer tainty being the most dif ficult par t. But I pushed through, and now things are really rolling.” Even with Flee The Light finished and distributed so far across Nor th America, Latin America, and The Benelux, Mancini is keenly aware that getting a film made involves an endless and ongoing amount of behind- the- scenes hustling. “I definitely made a lot of mistakes,” she readily acknowledges. “Now we’re doing a second and a third film, and we’re not going to make those mistakes. The first time I didn’t have someone to tell me what I was doing wrong.” No one makes a movie alone, and indeed Mancini is quick to credit Ontario Creates and the NOHFC for their invaluable suppor t. Mancini, meanwhile, aspires to help aspiring writers and filmmakers navigate the process of making a movie through Mythic Trips Enter tainment. “The vision is that Mythic Trips identifies talented writers, directors, musicians,” she says. “I wouldn’t say that we can give them a fast track, but we can give them an easier track toward getting things produced – more so than they would have on their own.” “We can help them with all that we’ve learned – all the boring grunt stuf f,” Mancini continues. “All of the math that goes into a budget, all of the finance planning. We take the headache away. I didn’t have that luxury – I had to do literally everything from the creative to the business to the sales. It was really nuts.” Mancini’s passion for movies doesn’t stop with writing them and being there as a one- stop resource for those looking to get a project from the page to the screen. She’s also working on bringing an immersive theatre experience to Toronto. Modelled on New York City’s wildly loved Sleep No More at the Mckit trick Hotel, the production will have theatregoers wandering through a space where there’s no traditional stage, cur tains or other barriers between those onstage and of f. “You walk around similar to the way that you would in a museum, and you are interacting with the actors,” she says. “You can make choices as to which rooms you go into and which narratives you want to experience. So it’s, yes, very immersive and very intense.” While still in development, Mancini already has ideas for what audiences can expect from Mythic Trips’ immersive theatre under taking. And, as you might expect from someone who dove into the world of witchcraf t for Flee The Light, there will be thrills, chills and some downright scares. “Most likely it’s going to be an adaptation – Dracula, Frankenstein, or something well known,” Mancini of fers. “There will be a lot of moving par ts, but I kind of feel like it will be easier than making a film.”