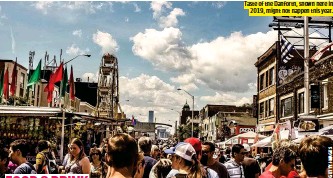 Sample Toronto’s new Asian night market, Superfresh For how alive the city is at night, there are precious few options for late night eats – basically poutine or pizza and not much else. Enter Superfresh, the new Asian night market that’s just taken over the Annex Food Hall space on Bloor. Seven vendors ( offering stuff like fried chicken, bao, Indonesian and Korean street food) plus a bodega and cocktails, take over the indoor/ outdoor space full of neon and primed for live entertainment. But the best part is that it’s open until 2 am Thursdays to Saturdays and midnight all other days ( except Tuesday, when it’s closed). ° Open now. 384 Bloor West. superfresh. to Load up on guac at Taco Fest Taco Fest got going just as Toronto’s taco scene started making a name for itself between the La Carnitas, Seven Lives and Playa Cabanas. This year’s festival takes place at Ontario Place West Island and will bring out big names like El Catrin, new success stories like Gus Tacos and Birria Catrina ( which are both helping Toronto catch up on the whole dipping the shells in consommé trend), and more names we have yet to discover. After you load up on tacos, try some tequila ( the festival boasts 26 kinds) and cool off with a paleta from Wrestlers. ° June 17- 19 at Ontario Place West Island ( 955 Lake Shore West). thetacofest. ca Sip some cold ones at Toronto Craft Beer Festival The largest independent craft brewers’ celebration in the city ( according to their site) returns to Ontario Place for a fifth season. Locals like Left Field, Henderson and Saulter Street will be in the mix with more than 20 others offering ales, ciders, stouts and lagers. ° June 24- 26 at Ontario Place West Island ( 955 Lake Shore West). tcbf. ca Get into a T. O. state of mind at Toronto’s Festival of Beer You can sample over 400 different beers at this fest – if you have enough tickets. After hopping from booth to booth and trying a very good cross- sampling of the country’s beer scene, settle in for a surprisingly good- sounding music lineup ( though anything might sound good after enough samples): old- head hip- hop icon Nas on day one and Canrock faves Sam Roberts Band on day two. ° July 22- 24 at Exhibition Place Bandshell Park ( 210 Princes’ Blvd). beerfestival. ca Fingers crossed for Taste of the Danforth The city announced the return of Canada’s largest street festival but as of this writing, no details have emerged about the tzatziki- flavoured event. The silence could be due to a few hitches. “We continue to work closely with the City of Toronto to resolve the outstanding logistical issues related to the festival,” Mary Fragedakis of the Danforth BIA told NOW. The City of Toronto’s Economic Development & Culture ( EDC) and Transportation Services divisions gave us a similar response, assuring that they are committed to working together with the BIA and festival organizers. Wondering what the issue is? It probably has something to do with how much the Danforth changed during the pandemic. There are now bike lines and a Cafeto program that brings patios onto the street. Both take up a lot of the real estate that the festival once occupied. Here’s hoping they sort that stuff out so the grills don’t stay cold. ° August 5- 7 ( TBC) on Danforth, east of Broadview. tasteofthedanforth. com Eat out all over town at Summerlicious Toronto’s Summerlicious and Winterlicious events ( and all their knockoffs) are big moneymakers for the local food scene. Restaurants advertise their prix fixe menus and then watch the reservations come in. Over the last two years, they’ve had to make do with takeout or hybrid versions. But this year, Summerlicious is back. The program will once again be taking over the city’s dining rooms and patios. It’s a more restaurantfriendly model this year, with more flexibility in setting prices for the special menus. ° August 12- 28, participating venues, prices and menus to be announced. toronto. ca/ summerlicious